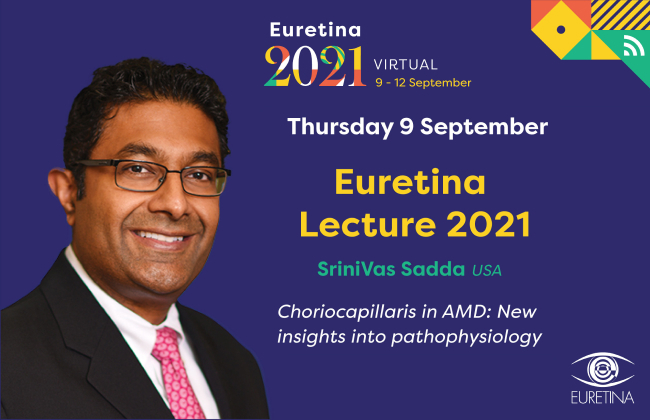 Although a relatively recent imaging technology, OCT angiography (OCTA) is helping to transform understanding of the choriocapillaris and its role in the pathophysiology of age-related macular degeneration (AMD).

In his keynote EURETINA Lecture to be delivered at the EURETINA 2021 Virtual Congress taking place from 9-12 September 2021, SriniVas Sadda, Director, Artificial Intelligence & Imaging Research, Doheny Eye Institute and Professor of Ophthalmology at the University of California, Los Angeles (UCLA), will explain how OCT-A combined with other conventional imaging techniques may provide a window into the relationship between choroidal vasculature and retinal alterations in AMD.

Dr Sadda’s lecture will highlight his team’s research findings in recent years on blood flow analysis in the choriocapillaris, a highly-vascularised layer located posterior to Bruch’s membrane and the retinal pigment epithelium complex, that has historically been challenging to visualize with conventional imaging.

With the advent of OCTA, however, blood flow in the choriocapillaris can now be identified with far greater detail than ever before.

“Continued advances in our diagnostic technology for evaluating the retina, and in particular OCT angiography, have allowed us to evaluate a structure, the choriocapillaris, that we previously couldn’t really understand well in our patients,” explained Dr Sadda. “This ability to study the choriocapillaris with OCTA has taught us that this structure may be very relevant to our understanding of both aging and the progression of AMD,” he added.

Dr Sadda’s research over the past five years has demonstrated how OCTA visualization and quantification of the choriocapillaris may provide a powerful new biomarker for assessment of AMD.

“We see that as the disease progresses, the choriocapillaris also shows signs of essentially wear-and-tear degeneration. The blood flow deficits increase with age, especially centrally, and continue to progress during the evolution of AMD. We have shown how these deficits may predict the appearance of drusen, progression to neovascularization or geographic atrophy (GA), as well as enlargement of GA,” he said.

“It has been shown that the flow deficits in the choriocapillaris are most severe directly below the drusen in intermediate AMD eyes. This adds to the growing body of evidence that the location of drusen is not stochastic and that choriocapillaris flow impairment on OCTA may be a meaningful indicator of the severity of disease in AMD,” explained Dr Sadda.

As Dr Sadda sees it, enhanced knowledge of the role and function of the choriocapillaris in the disease process will potentially bring a range of clinical benefits.

“It should provide insights into the pathophysiology of AMD, knowing why someone may develop the disease or why they may manifest certain findings from the disease. It also has a predictive value in predicting the rate of progression that a patient might have. In the near future, it is perhaps something that we can use to target future therapeutics or use as a biomarker to monitor the impact of our treatments,” he said.

Given the complexity of AMD as a known multifactorial disease, Dr Sadda stressed that his lecture will primarily highlight the role of the choriocapillaris as a valuable marker for the overall health of the retinal pigment epithelium (RPE).

“I’m by no means suggesting that the choriocapillaris is the primary factor in the development of disease, but rather that it serves as an accurate reflection of overall RPE happiness. After all, AMD may in fact be a number of diseases that manifest as a common final pathway, so there may be some patients where the choriocapillaris is most important, and others where the alterations that are happening to the photoreceptors or RPE cells or Bruch’s membrane may be most important,” he said.

Going forward, Dr Sadda anticipates that diagnostic imaging devices will one day provide automatic information about the choriocapillaris that might be used in daily clinical practice.

“The key driver of that will be clinical trials in the future looking at the choriocapillaris and using it to demonstrate the progression of disease or the impact of treatment. It is still early days but I think the thrust of our research strongly suggests that the choriocapillaris is a great biomarker which tells the tale of the evolution of macular degeneration.”

SriniVas Sadda MD will deliver the EURETINA Lecture 2021 “Choriocapillaris in AMD: new insights into pathophysiology” at 16.00 CEST on Thursday 9 September 2021

Euretina Past President, Frank G. Holz, has been elected as a new member of the Leopoldina.