Case: Not Everything Is What It Seems

Part of the 6 cases presented by MR/VR fellows from London’s Moorfields Eye Hospital, covering a range of topics including uveitis, oncology and VR.

Pilar Martin Gutierrez (00:00)
Good evening everyone and thank you for allowing me to present this interesting case titled Not
Everything Is What It Seems. Our patient is 73 year old male in the genetic clinic Morphus by hospital
accompanied by his daughter. Visual acuity was 636 in both sides eyes. He had been previously
diagnosed with retinitis mentosa at the age of 13 and had been referred to Morphus from his local
hospital for genetic testing.

Pilar Martin Gutierrez (00:25)
His main complaint was decreased central vision from his childhood which did not improve with
glasses as well as dark adaptation, night vision and peripheral vision problems. He felt that his
peripheral and central vision loss have progressed over the last few years. Due to poor central vision
he could never drive and apart from hearing problems in the Dadford lately related to his job as a
vehicle engineer in hemokhromatosis will fit and healthy.

Pilar Martin Gutierrez (00:51)
These are the patient’s protocol of thunderstorms and autofluorescence images showing segmentary
and atrocities in the retinal mid periphery with an abnormal thunders reflects on both eyes. Velocity
scans reveals laws of arternal layers in both maculae affecting phobia. His family history was such
that four maternal cousins are also affected with a similar condition. The pattern of inheritance in this
family seems unlikely to be dominant due to the lack of other affected generations. Autoimmune
recessive inheritance may be possible, but given the lack of affected females, excelling recessive
inheritance seems the most likely option because excellent RP carriers exceeded as a beautiful
wedding reflex.

Pilar Martin Gutierrez (01:28)
We examined the daughter. Her daughter’s examination showed no signs of RP carrier state. She told
us that she has a son and a daughter and that his son was recently seen in the pediatric genetics
department in Morphine.

Pilar Martin Gutierrez (01:43)
The patient’s grandson, who also complained of poor central vision, has been seen in his local
hospital since the age of two. Given his family history of excellent therapy, these are the puddles of
Pandas pictures images and ultrafluorescence images of patients. There seems to be a spot of
hyperchlorisons in both eyes centrally.

Pilar Martin Gutierrez (02:01)
Those are discounts rebuilt bilateral cystic microidema. The grandson’s electrophysiologic testing
showed no evidence of generalized Con. Overall dysfunction bilateral cystic macavd minor child could
make a sling of extinguishing the crisis. It is commonly associated with an electronegative waveform
in the standard flash EIGS. This was not present in our case. Bilateral cystic macular edema can also
be found in patient harboring COP1 gene variant.

Pilar Martin Gutierrez (02:35)
However, the pattern of inheritance of this genetic condition is sort of a recessive which does not
seem to fit with a family pedigree. Grimaldi (04:37)
So could this be developmental, for example, FEBR? Now the genetic testing is pending, but there is

Pilar Martin Gutierrez (02:44)
Genetic testing of the grandson reveals an essence variant in the Arizona gene which was also found
in the grandfather, thus confirmed in the diagnosis of X linked Retinoschisis in both patients. X linked
Retinoschisis typically exhibits resistantral vision and written ascetic changes in the macula which
can become atrophic over time. However, a number of different features may also be present, such as
peripherals cases, monthly or changes. It collection of the periphery, implementary services and
feature sales. Although X linked Retinoschisis typically shows an electronically form the strong
flashier, it has been shown that some patients with missense variants because we just showed they
have less severe or even normal responses, whereas nonsense splicing side of frameshift variants,
they exhibit more severe electrophysiological operations. Reduced B wave in the bright flash AIG
implies reduced inner retina function, which may explain the night vision problems in a 73 year old
patient.

Many things for your attention.

Adnan Tufail (03:56)
Thank you Pillar, for great presentation. Omar, maybe I can ask you about some comments and so the
sensitivity of electronegativity in this context, what’s your thoughts and approach given that case?

Omar Mahroo (04:12)
Yeah, thanks very much. And thanks, Pilar, for presenting that. Pilar is our superstar from Stella
Manka. So yeah, lots of learning points in this case and your issue of electronegativity. I think when an
ERG is electronegative, it’s a very important sign and it really reduces our differential of associated
genes in the context of genetic disease. And even in a quiet disease, it makes you think of certain
diagnoses. But one learning point here is when you don’t have an electronegative ERG, it doesn’t
necessarily exclude certain diagnoses. So with the other classic genetic causes, congenital nightline
is where you invariably get an electronegative VRG, but with X linked Retinoschisis. The other main,
you don’t always get an electronegative VRG, and sometimes you just get a reduced B to a ratio in
some of the miscense mutations. And rarely it can be within normal limits, like in this case. And I
think clues to this person’s diagnosis where his central vision was affected first. So he carried the
diagnosis of RP for however many decades, 60 years, I think. But his central vision was affected first,
which doesn’t really happen in RP. It should be the night vision and then the profile vision and finally
the central vision.So that would have been a bit of a clue.

Omar Mahroo (05:31)
His OCT looked kind of diffusely thinned rather than just the outer segment loss. You get in RP, the
Sheen you can see in X linked RP as well as an X linked Retinoschisis so get a bit of sheen on the
periphery, so that doesn’t necessarily narrow it down. And I think the family history is important.
Whenever you see maternal male cousins related through the mum sister, then you should think of X
linked disease or a maternal uncle or a maternal grandfather, not a maternal grandfather and a
maternal uncle. I got a case sent to me as a query, X linked disease, and it was the maternal
grandfather and the maternal uncle were affected. And if you think it through, the grandfather couldn’t
have passed it to their son. In that case, X link, so that’s helpful here and then there’s no treatment
anyway. Is there a difference? Well, there is a difference because we do have treatment emerging, so
getting the right diagnosis is helpful and counseling in terms of risks of passing it on. If we’re sure
about an X linked pedigree, Then we know what the inheritance is. But X linked RP can affect females
where X linked Retinoschisis doesn’t. So, yeah, quite a few points here. Alan Bird is on the panel as
well. Do you have any comments?

Alan Bird (06:49)
We’ve got little to add except we have had a male in his 60s presenting just with well defined atrophy
of the fovea and nothing else. And there was nothing to suggest X linked skysis until we looked at his
grandson and then the diagnosis became clear. The grandson having normal vision at the time. The
only thing is quite variable. I’ve seen one male in his 40s with 69 vision still, so it’s quite variable in
severity.

Adnan Tufail (07:23)
So, Omar, the auto force of the original patient that they saw is not I mean, I must say I would not have
picked on that in a million years if you didn’t have the rest of the family history. Is it you’re getting to
the point where you just and it wasn’t electronegative, you would just actually just do the gene panel
now?

Omar Mahroo (07:45)
That’s right. Yeah. And in the UK, we’ve now moved the whole genome sequencing for everything.
This guy could have just done one gene, but, yeah, with the retrospectoscope and with the grandson,
it becomes easier, and then you see all the signs of X linked Retinoschisis in this individual. But, yeah,
fresh looking at that, it’s not screaming X linked Retinoschisis. The Sheen can be there in X linked RP.
The rest of him doesn’t look like X linked RP. That should be a lot more severe. TTL5 associated
retinopathy can give you a Sheen as well, but that just gives you a problem in the center rather than
this widespread. So this area of pigmentation, you can see why they diagnosed it as RP. That was
quite reasonable, especially in the absence of ultra Widefield imaging. Probably that was all you kept
on the image and you think this is a patient with RP, but looking at it, you can see the distribution is a
little bit funny. There’s nothing temporally. We have a few patients with sexual RP Where it’s more
inferior than superior. But this weird sort of nasal Crescent is a little bit odd thing about it was definite
and really the family history and the grandson health.

Adnan Tufail (08:55)
So thank you, pillar and Omar fantastic variability of that case. 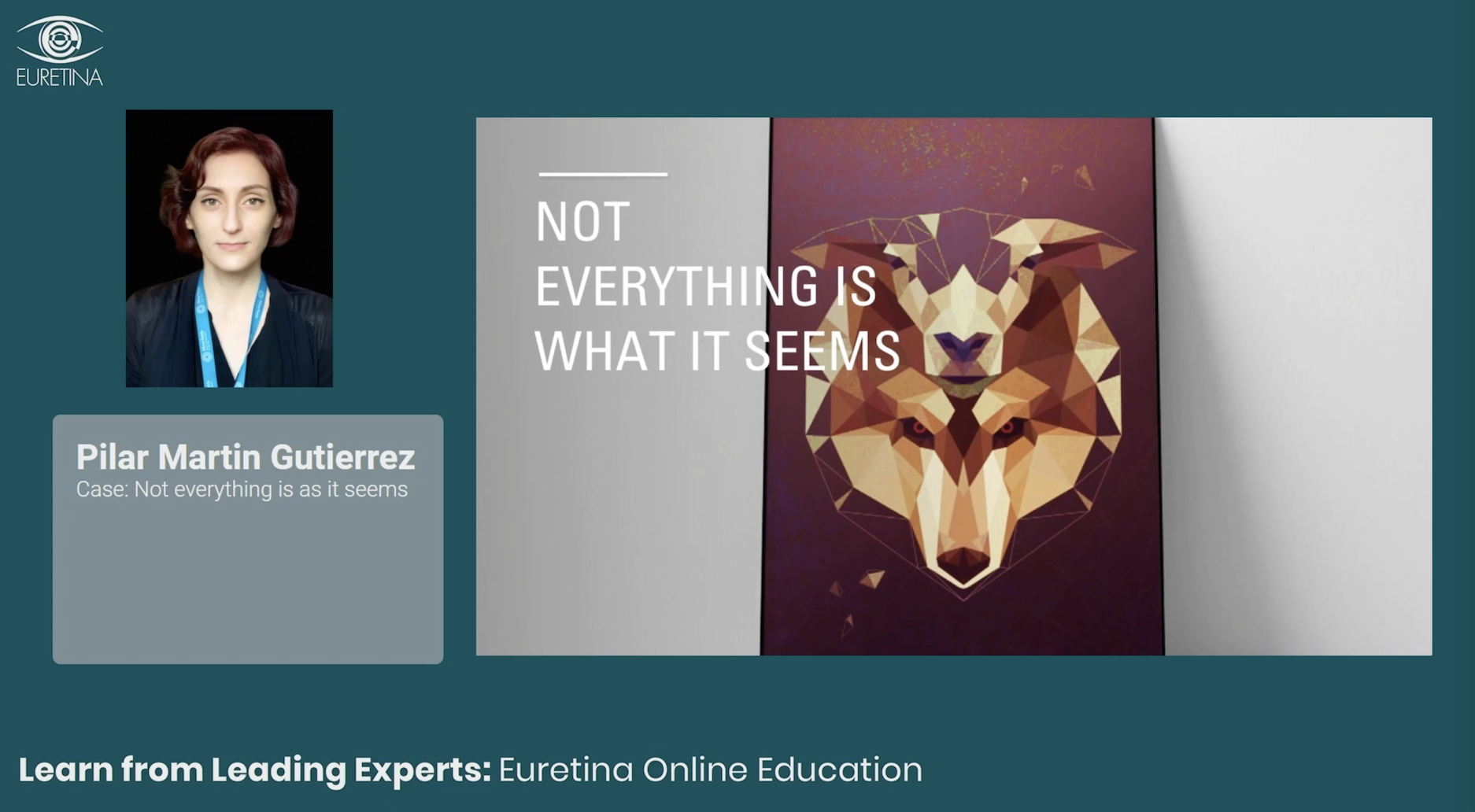 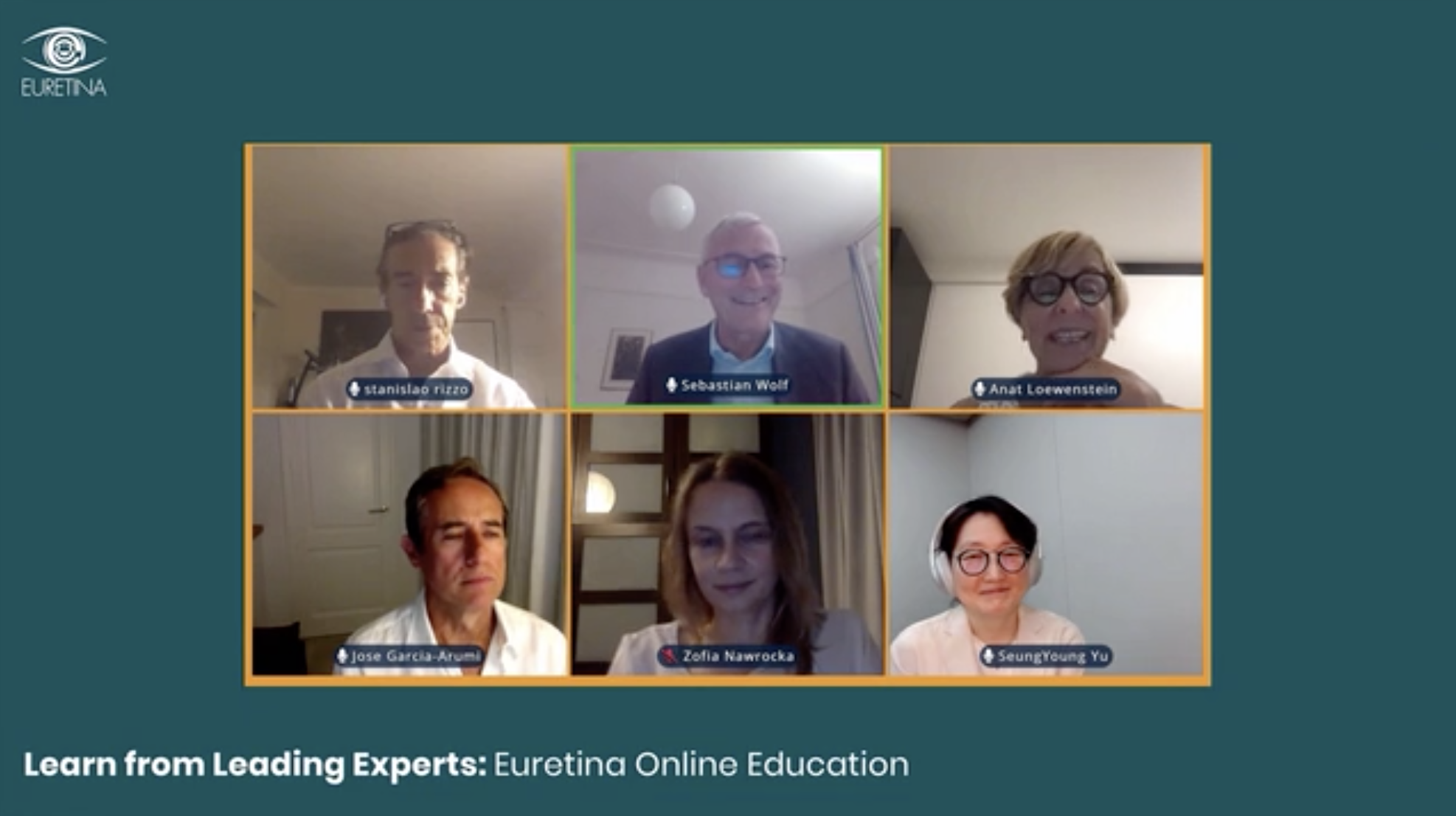 Educational Debate 3: Treatment of choice for a patient with a persistent macular hole? (Mon 21 Jun)