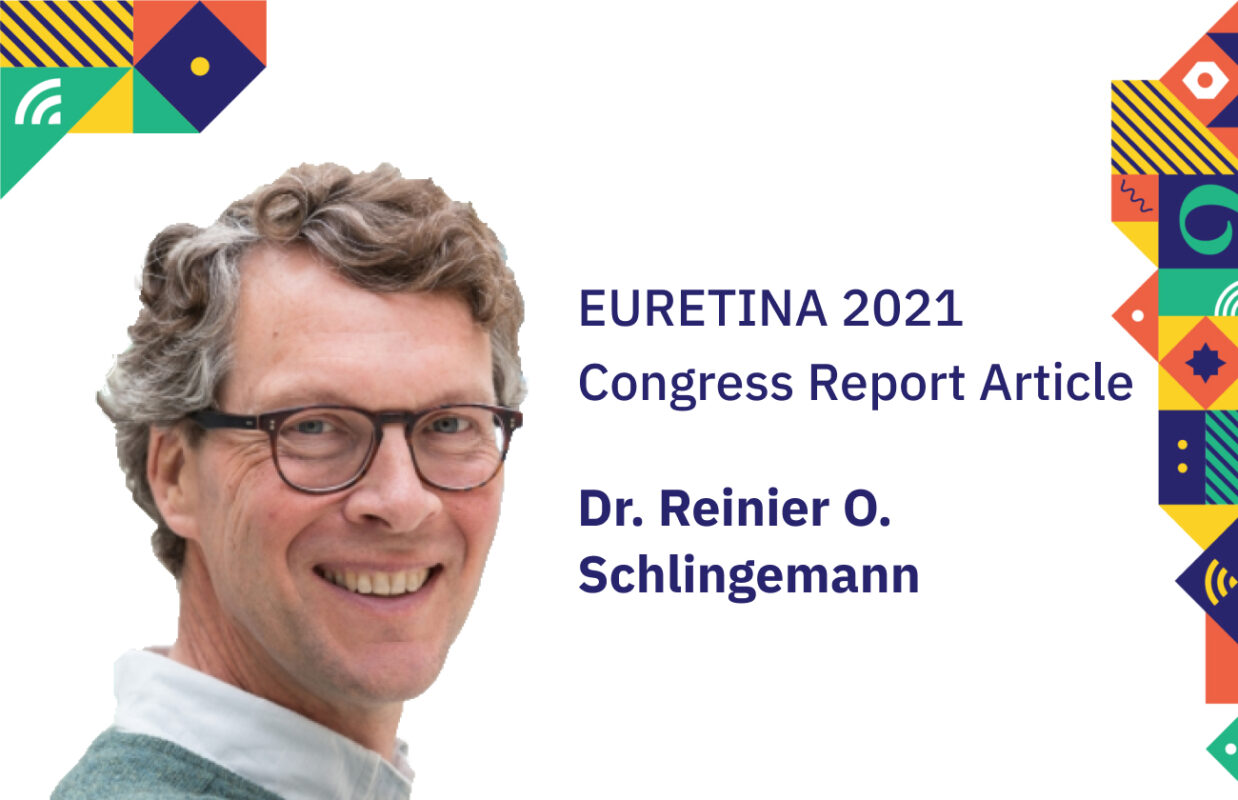 Treatment with anti-VEGF agents is not automatically the best strategy to employ in patients with diabetic macular oedema (DME) and good visual acuity, according to a presentation at the EURETINA 2021 Virtual Congress.

Speaking at the EURETINA session on diabetic retina, Reinier Schlingemann MD, PhD, Professor of Ophthalmology at the Academic Medical Center, University of Amsterdam, The Netherlands, called for a more nuanced approach to treating patients based on the available clinical evidence.

“Patients with DME and vision loss are usually indicated for anti-VEGF treatment and can benefit greatly from it. However, it is less clear what we should do in patients without visual acuity loss and centre-involved macular oedema. Should we give them anti-VEGF therapy, like many colleagues do, treat them with laser or settle for observation?” he said.

Turning to the evidence, Dr Schlingemann said that the DRCR.net Protocol V clinical trial of patients with centre-involved DME (CI-DME) and good visual acuity concluded that such patients can confidently be managed by observation, with anti-VEGF injections to be used only if their vision deteriorates.

However, clinical trials are not the same as real-world practice, with some factors limiting practical implementation of these recommendations, he said.

“The mean central subfield thickness (CST) was only 311 microns and only 8% of patients had a CST greater than 400 microns. The patients in general had good control of diabetes and blood pressure which is very different from patients in daily practice. Also the study population did not represent severe non-central clinically significant macular oedema (CSME),” he said.

In the Protocol V study, there was a twofold chance to receive aflibercept for visual acuity loss if patients had a CST of 300 microns or greater, non-proliferative diabetic retinopathy (NPDR) level worse than moderately severe, and a non-study eye receiving treatment for DME within 4 months of the initiation of the study.

“Some other studies have also addressed this point and found that older age and worse baseline retinopathy severity scores were associated with visual acuity loss in such patients,” said Dr Schlingemann.

He noted that the ETDRS study showed that patients with CSME did better with laser than with observation. Moreover, this improvement was not related to baseline visual acuity, with 63% of the patients in the study having a visual acuity score of 0.8 or better.

Summing up, Dr Schlingemann said that while observation is the advised standard for patients with CI-DME without visual loss, based on Protocol V, a personalized approach is key, where treatment with laser could be considered for patients with non-centre-involving CSME, and particularly in more severe cases.

“However in the presence of certain risk factors or symptoms one may even consider anti-VEGF or laser for patients with higher central subfield thickness greater than 300 microns, moderately severe NPDR or worse, anti VEGF treatment in the other eye, older age, metamorphopsia, and documented loss of one or more lines of visual acuity,” he concluded.

ZEISS: Fine-Tune your Vitreoretinal Surgery – How to get the best view for you and your patients